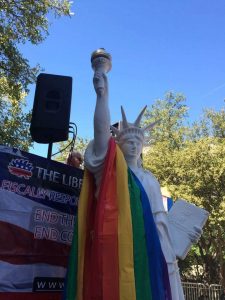 It’s one of the most fun outreach events we do all year! RIDE ON A PARADE FLOAT! MARCH IN A PARADE! Talk to others who are looking for a political home! Win hearts and minds!

It’s the 2016 Tarrant County LGBT Pride Parade and Picnic on Sat, Oct 1. You’ll get details on our exact float location and booth location when we get them.

We’ll be gathering around the trailer which will magically become our parade float – but we’ll need your help to decorate it! This year it shouldn’t be too hard, but we’ll probably meet closer to 8:30 AM just to make sure it all gets done. We’ll meet in the Sundance Square area – and we have a newer, longer parade route this year.

We’ll be playing some fun music as we go down the parade route, dancing, sign waving, throwing kisses – but not throwing anything off the float. (I’ll give you all the rules later).

We can probably get about ten people max on the float- just FYI.

I’m checking the box that it’s ‘family friendly’. Tarrant County Pride Week is a little more ‘family focused’ event than some other counties (just sayin’). In fact, the theme is “We Are Family: Reunion Parade and Street Festival”…